Whether it was the Solar Flares or the effects from another Mercury Retrograde our KONA 100.5 LPFM radio station was not immune. The net result was that we had to send back our transmitter to the manufacturer in San Diego for a repair under warranty. It was received by them on Thursday, April 12th.

In the meantime, this development sets the stage for an ideal time to initiate the placement and construction of our Solar Energy Project. With assistance from our own DJ ‘the Guvna’ and Hot Stuff Engineering, the rather large #1600 battery pack was able to be placed on wheels in preparation for placement near our station’s broadcast facility starting this week.

The time and method for charging this battery is initially expected to be about 2 weeks. Enough time to allow for the placement of the Solar panels to be laid out on a grid atop of our broadcast housing. 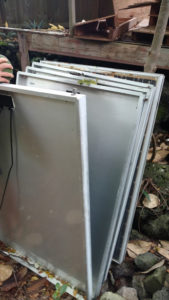 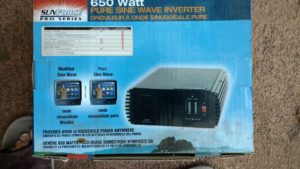 It will be augmented with a Pure Sine Wave Inverter upon completion of the layout. The final stages of this project will involve securing a Voltage regulator along with the necessary Cables to make the connections.

As was the case back in January when it became necessary to take one step back (by upgrading our Shoutcast server) in order to take 2 or 3 steps forward, this is a very exciting time towards improving our facility over the long haul. It has, after all, been part of our original vision to run the entire station purely on Solar Power for the purpose of saving on the costs of Electricity and for securing a stable and uninterrupted broadcast 24/7.

While these improvements are being put into place, we will continue to broadcast on our Internet shoutcast at RadioAlchemyKONA.com

We also have a big day coming up on April 28th when the next chapter of Electric Beach Ball takes place from sunrise to sunset down at Kohanaiki (aka Pine Trees). Radio Alchemy is planning to broadcast from this event as well as from Out the Box at Mybar later than evening. Hopefully, by that time we do have our FM facility back broadcasting to our KONA Community.

Another goal that we have set for ourselves during this quarter is to secure a total of 6 more DJ’s by June 30th and have them trained and ready to broadcast by that time. If anyone is interested in securing a show, please complete the following DJ Registration Form and provide the necessary information to us.

Thank you for helping to support your Community Radio Station – KONA 100.5 LPFM.